The original Hetling spring borehole which supplied some of the main spas of Bath City, with natural hot geothermal spring water was in poor condition.

Its mild steel casing was in danger of corroding through allowing the artesian water to escape. As a consequence, this would cause the hydraulic head to drop and pressure to all other springs would be lost – a disaster for Bath’s tourist industry.

The client also required a hot geothermal spring to supply a new hotel being developed. It was therefore decided to combine the two former situations. The agreed solution was to drill an angled borehole to penetrate the base of the Hetling Spring and design this new borehole to be branched at the surface to supply the adjacent hotel development. Once the new borehole was completed and tested, the original faulty borehole could be permanently abandoned removing the danger of failure.

During the construction works on the new borehole all artesian water encountered had to be controlled at all times so as not to lose the feed to Bath City’s historic spas. The new borehole was sited 18mtr south of the original and set at an angle to intercept the base of the original. The location was in Hot Bath Street and it was necessary to drill through the road and into a basement below which would eventually house the headworks. This necessitated a road closure for the duration of the works. To complicate matters, no drilling additives were to be used as these may contaminate the hot springs, a definite ‘no’ for the City of Bath.

This was an extremely challenging and complex project, needing all the innovation and skills of Drilcorp’s most highly experienced engineers. Plans were drawn up and agreed by the Bath spa regulators who were to oversee and monitor every step of the operations.

A rotary top drive Beretta T57GEO drilling rig was chosen to carry out the work. The borehole was to be advanced in stages using a Geobore S wireline system to prove the strata and aquifers in order to decide upon the casing installation depths.

Stage 1 involved determining the top of the Lias clay beneath the superficial deposits. A 750mm conductor casing was installed to prevent surface collapse and maintain alignment of the borehole which was inclined 18˚ from vertical.

Once determining the thickness of the Lias clay, around 20mtr thick, the borehole was reamed open at 450mm (18”), a 300mm (12”) centralised mild steel casing was installed and the annulus grouted throughout. The casing could subsequently be fitted with a flange and 300mm gate valve, crucial to guarantee the stopping of any artesian flow which would occur during the advancement of the borehole.

When cement was set, the casing was pressure tested to ensure that it could withstand any artesian flows found deeper in the borehole. Wellhead control was enhanced with the use of an annular blow out preventer and flow diverter. The borehole was advanced with the coring system,regularly encountering artesian flows of hot spring water; all of which had to begrouted and isolated before continuing because the target spring was of a known quality and could not be contaminated.

The project faced many challenges during drilling but tests were carried out afterwards, proving undoubtable success with crystal clear 49˚ hot water running in a controlled and sustainable environment. Following extended flow and pressure testing which proved the integrity of the new borehole to the client, Drilcorp was instructed to terminate the original Hetling Spring borehole. 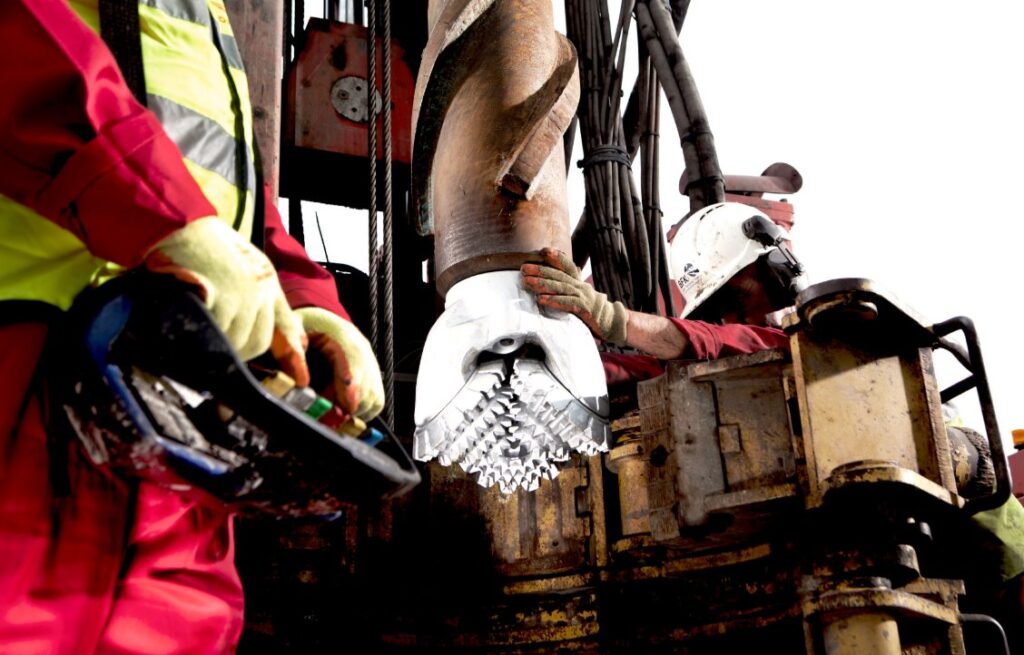