Drilcorp was recently contacted by a long-standing client with a number of public water supply boreholes. One of their wellfields was close to full capacity during the tourist holiday season but had a problem with one of its water supply boreholes. This particular borehole had regularly experienced problems with turbidity but, more recently, had developed yield problems and was in danger of complete failure.

At the time Drilcorp was contacted, the spring holidays were rapidly approaching and our client was fearful of not being able to meet demand. They needed urgent help.

At this point, they contacted Mike Bushby, contract manager of BES, Drilcorp’s engineering division for assistance to refurbish the borehole. With little time available, Mike and our team of engineers were mobilised to site along with our Borestorer® to rectify the problem.

The Borestorer® unit has a high-pressure jetting tool, which is lowered into a borehole using a computer-controlled winch. Once activated, it rapidly rotates and sends shock impulses of clean water through the wellscreen and deep into the filter material and borehole wall. This loosens any encrustation and clogged silt debris that has formed over time and restricted the flow of groundwater into the borehole. Loosened material is then removed from the borehole using an airlift eductor, submersible pump or a combination of both until clean water is being produced by the borehole.

Our sequence of works on this project was as follows:

The results were excellent. Turbidity was found to be well within the acceptance guidelines, and yield had significantly improved. The borehole was put back into service just before the holidaymakers arrived and a sigh of relief was breathed by all. 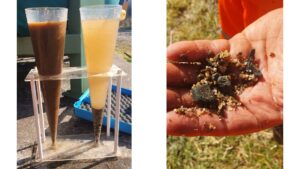 Our client, who had previously thought that the borehole may need to be permanently decommissioned, was delighted with the result. Although the development work took a little longer than anticipated, the positive result served to strengthen our relationship with the client and out Borehole Engineering Services team are now being considered for future borehole refurbishment projects.

To find out more about the cleaning and remediation services provided by Drilcorp, please get in touch via info@drilcorp.com or by calling 0191 527 3970.

BOREHOLES ARE OUR BUSINESS 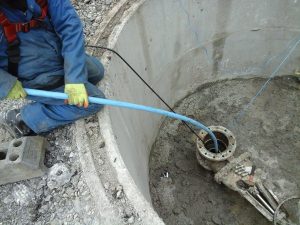