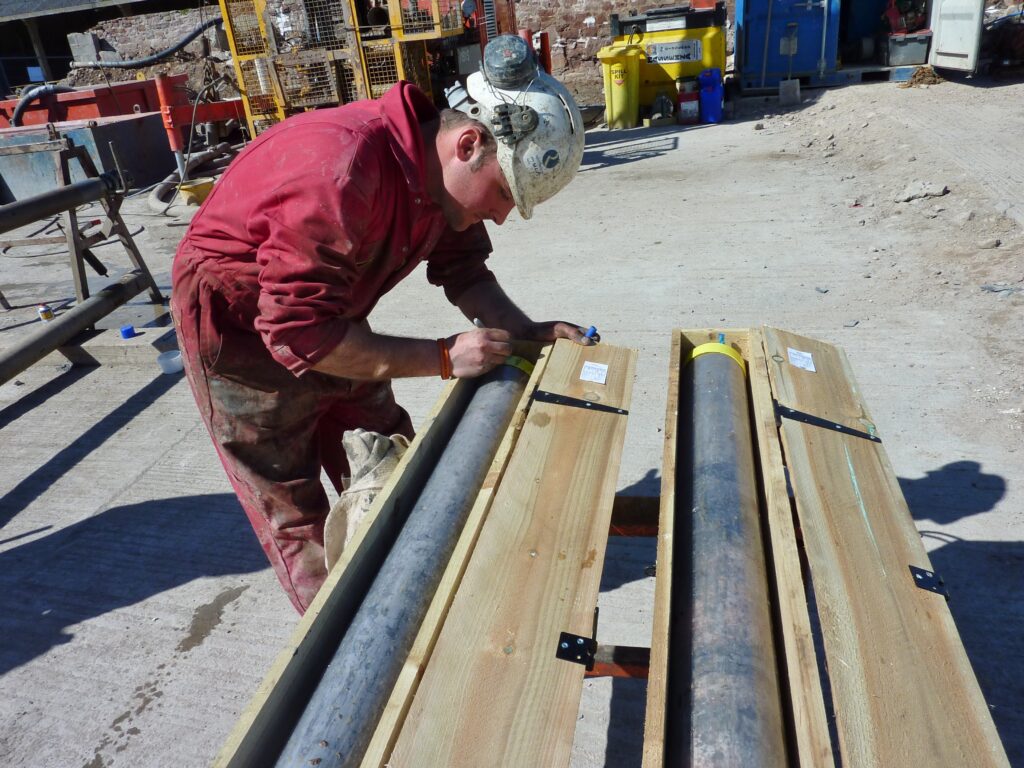 Drilling for Tetrapods in Berwick

The National Museum of Scotland

In 2013 Drilcorp were asked to be part of a project to drill a 500MTR borehole in Berwick  to obtain high quality cores. The objective of the borehole investigation was to investigate the core sequence to determine the period when creatures evolved from entirely sea based aquatic animals to fully terrestrial land based and developing lungs. From the core that was drilled and extracted several tetrapod, fish, arthropod and plant specimens were gathered from a number of the lower carboniferous sites in the borders region and Northumberland.

The work helped to understand the evolution of animals and to clarify the sequence of events through time and to understand the wider environmental influences acting upon them at the time. The team investigated the conditions in which tetrapods and fauna lived and died and measured sections of the core to locate known and new fossils.

Drilcorp carried out the work with a Beretta T151S rotary top drive track mounted drilling rig. Modifications were carried out to the drill head to gain extra rotational speed. Rod handling and clamping mechanisms were modified to handle the delicate wireline drilling system and an upgraded wireline winch was fitted.

This was a highly prestigious job and Drilcorp had only one chance to get it right so contacted the experts for top rate advice.

The chosen drilling system was Geobore S wireline which provides a 101mm core and is commonly used to obtain good quality cores in soft and broken superficial materials. It is not generally used on deep drilling and it may be that this was one of the deepest boreholes drilled with a string of Geobore S. Only the best quality system could be used for this borehole and this was provided by Atlas Copco who quality test and guarantee their product.

As the borehole was to be drilled through swelling mudstones and gypsum/anhydrite beds it was decided to use a slightly oversize bit and reaming shell to gain a little extra clearance. An extremely good Carbonado diamond bit was provided by JKS Boyles.

The flushing medium was mud and Baroid, worldwide specialists to the oil industry provided a detailed recipe of the mud to be used and how it was to be mixed. This was supplied by their agent Boode UK.

All things in place and we were ready to commence the drilling. The first 100mtr proved the most challenging, with several fracture zones where circulation of drilling muds were lost. These had to be cemented with a special low slump grout in order to regain circulation – it would be impossible to carry on without circulation and it was too early in the borehole to case off. Circulation was recovered and the remainder of the borehole passed off without any major problems. The borehole was completed at 501.33mtr and core recovery was around 99%. Geophysical logging was carried out by European Geophysical Survey.

The client was delighted with the results.

More information on the project can be found at: