The Heat is on in Colchester

The Northern Gateway area is one CBC’s main growth locations which effectively expands urban Colchester outwards to its northern physical boundary on land either side of the A12 around junction 28. Taking an “infrastructure first” approach, the development of the remaining land will benefit from the heat network in addition to a gigabit broadband full fibre network which will be available to residents and business alike.

Drilcorp won a tender issued by CAEL to carry out some provisional works on the land adjacent to Axial Way, which forms part of the Northern Gateway.

A borehole was installed to 135 metres below ground level into the confined chalk layer and tested to confirm the viability of and to provide part of the infrastructure.

The primary heat source for the network will be an open loop Water Source Heat Pump (WSHP), delivering low carbon energy to the multiple new buildings to be constructed on the Northern Gateway development including residential and commercial buildings and health care facilities.

With the population due to increase significantly in coming years and with the importance of new sustainable technologies at the heart of the Government’s agenda, Colchester looked to enable the installation of a heat network scheme which would provide an affordable and sustainable heating. The alternative would be to do nothing, which could lead to an increase in Colchester’s carbon production. With current figures indicating that 14% of the UK heat demand could be met by low carbon/sustainable solutions by 2030, this forward-thinking scheme will assist in lowering Colchester’s carbon footprint for future generations.

Works commenced early June 2018 with a rotary top drive drilling rig and a recirculated polymer mud flush system. The top section was cased off with a 457mm steel casing to seal out the upper superficial deposits into competent ground in this case the London Clay. This was to provide a seal for environmental purposes and to aid the drilling process. Drilling progressed at 444mm but an unexpected band of sands and gravels was encountered which could not be stabilised with additives. An additional casing was procured and installed into the bore to enable the borehole to be advanced to a depth to install the main production casing by sealing off the unexpected strata. The borehole was drilled at 444mm to 75.96mbgl and a 340mm steel casing installed and the annulus fully grouted. At this point the borehole was cased off into the target horizon of chalk and the borehole was then progressed at 311mm to 135m, developed and the drill plant removed.

An engineering crew then mobilised to site and carried out a specialist acidisation treatment on the borehole to open up any fractures in the chalk with the aim of maximising the yield. Initial indications showed there was an increase in yield but not to the desired amount so an additional acidisation treatment was applied. A pump testing program comprising a step test and a constant rate test was then carried out and the yield assessed. Again it was evident that the yield had increased but the yield was a little less than desired so a further acidisation treatment was carried out followed by a further step test and constant rate test which demonstrated the yield had increased to a point where the clients requirements could be met. A recharge test was then carried out on the bore to see if a similar borehole in the same strata would be capable of working in tandem with a production borehole in an open loop geothermal system. Works were completed in the second week of August 2018 to the satisfaction of the client and the specification.

More information on Colchester Amphora can be found below. 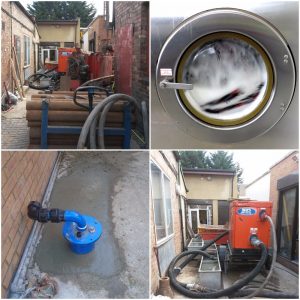 Next post DON’T GET HUNG OUT TO DRY WITH WATER BILLS!