There’s a frog in my borehole! 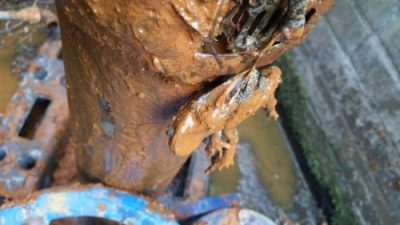 ­­­­­­­­­Borehole Engineering Services was approached by a global drinks organisation to investigate reduced yield on its wellfield suppyling water to thier production facility in Scotland.

BES were called in by the drinks company along with a consultant to improve the yield on all four boreholes.

The yield on the boreholes had declined over a period of time and were struggling to keep  up with production at the factory.

The fisrt part of the project involved removing each pump from its borehole one at a time. This had to coincide with a time that the factory was using the least amount of water to avoid disruption.

The consultant had engauged a Geophysical logging company to log each borehole once the pumps were  removed.

During the pump removal of the first borehole, a frog was found attached to the riser section.  The riser pipe was a screwed and socketed pipe and in a bad condition so it needed to be cut up, it was also coated in iron residue . Logging was carried out on the borehole, and it was decided not to put this borehole back into production due to the cost spent.

In the other three boreholes the pumps  were succesfully removed and logged. These riser pipes were of wellmaster construction and were servicalble to reinstall once they had been cleaned of the iron which was blocking the pump suctions and non return valves.

All the logging records were reviewed and an action plan put together for remediation of the remaining boreholes. Starting with the most productuive borehole which needed a full overhaul.  The upgrade involved mechanical and chemical cleaning, a new pump, riser and headplate.

The client stipulated that before the remediation on the other boreholes could take place, the yield had to be confirmed.  The first borehole was cleaned but there was no increase in yield. BES carried out a further pump test using a new pump and this proved that there had been a pump failure on the original installation. Once a new pump was installed the yield improved immediately.

The Factory manager was impressed with the work carried out by BES.  Cleaning the pump suctions had led to an increase in yeid from the well field. Due to budget constraints in the business the works had to be postponed until the new financial year. BES will return to complete the works later in the year.

Next post Mud treatment systems: the future of drilling?