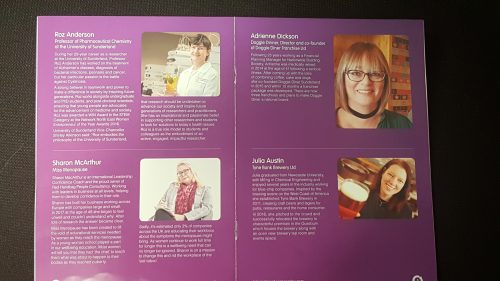 I was lucky enough to be invited to the International Women’s Day event held at Hope Street Exchange on  8th March.

International Women’s Day is a global day celebrating the social, economic, cultural and political achievements of women. The day also marks a call to action for accelerating gender parity.

Four entrepreneurial business colleagues who are passionate about the North East Region and championing the success of Females in the workplace,  joined forces to organise a one day conference celebrating the success of women in the workplace. The aim was to show the importance of women at work and what can be achieved for people who decide to go it alone or work within a corporate environment. The event showed the passion and capability of many amazing ladies who step outside of their comfort zone to achieve.

The event played host to some fascinating talks from our guest speakers:

After graduating from The University of York in Law, Naomi started her career as a project assistant for Sunderland software city. Working with the senior management team she got involved in recruitment and when they couldn’t find the right person to develop and launch their projects Naomi volunteered. She became a project manager for the Digital Catapult NETV Initiative.  Naomi has continued to push herself in her career and last year was appointed Head of Innovation.  She is skilled in stat up support and corporate innovation and has a passion for the North East Tech Sector.

Sarah started a marketing firm in 2007 and as a marketer and mother wanted to bring the fun and sparkle back into Christmas. She developed an Elf for Christmas Toy from her home and spent months working with a manufactuer in China to get the right toy. She ordered 3000 units and when they arrived it soon became obvious that she needed a factory or warehouse. Her friends and family helped her package and send her orders as her home became a delivery depot. She started to get calls from high street stores to stock her product and developed a retail box and launched a girl doll which outsold her boy version. Sales were booming, she has a distributer and had launced new products in the range. Her Elf Advent letters were featured on ITV’s This Morning program and the phone rang off the hook for orders. When she got a call from a friend one day to say they had seen her product in B&M she was concerned and went to see for herself. Only to find that they had copied her design and concept. Sarah is now in a legal battle with B&M to protect her design and awaits the outcome. 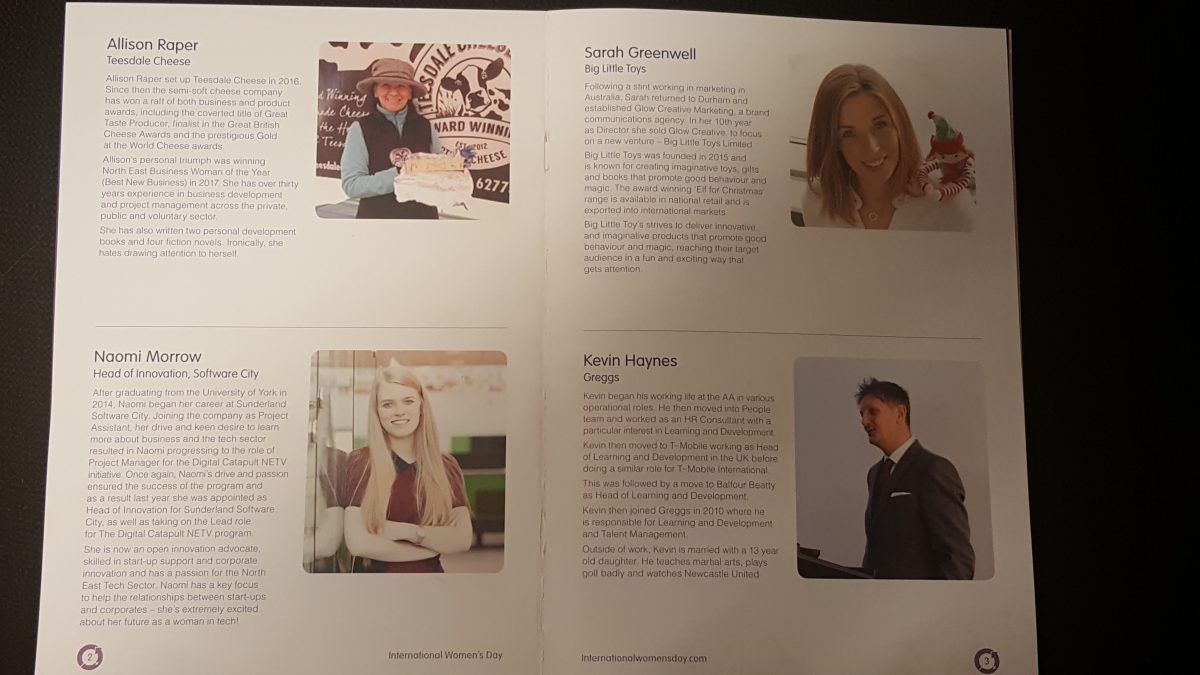 Roz is a truly inspirational women who has worked at Sunderland University for a number of years as a lecturer and researcher into Pharmaceutical Chemistry.

In her 29-year career as a researcher at the University she has worked on the treatment of Alzheimer’s disease, diagnosis of bacterial infections, psoriasis and cancer, but her particular passion is the battle against Cystinosis.

This genetic disorder is a largely misunderstood and under-researched illness, which affects around 2,000 people worldwide. Many sufferers die before the age of 10 due to lack of knowledge about the illness and its treatment and, until recently, few lived beyond the age of 20.

In 1994 one of Roz’s colleagues, Professor Geoff Rowley, a formulation scientist working in collaboration with a consultant at the RVI in Newcastle, developed a formulation of micro-pellets, tiny particles that prevented the smell and taste of Cystinosis medicine, so that children could take it much more easily. But when Geoff retired nothing further happened, and Roz began to see how it would be possible to use chemistry to help solve this problem. This was the beginning of what became her passion and her life’s work – to tackle this terrible disease. Now Roz and her team have a candidate molecule that’s ready to go into pre-clinical trials.

She hopes to hear in May of this year if the funding will be granted to take the drug to trials.

Later last year she was diagnosed with Cancer and given a short time to live but Roz has returned to work and continues to support the Cystinosis charity and her students.

Sharon started her career as a leadership and confidence coach. In her late fourtys she began to feel ill and realised that she was going through what every women dreads. The Menopause. Sharon realised that businesses did not understand what we go through and has developed a support group on Facebook and seminars to help women understand and talk about the last taboo that is the menopause. There are some sixty symptoms and Sharon thinks that all businesses should eductate their workforce and make it easier for women to talk about it.

Adrienne began her career as a YTS at Nationwide Building Society and worked her way up while bringing up her daughter on her own.  When suddenly one morning she collapsed at home she was rushed to hospital and diagnosed with a brain tumour. Her life changed and she found she could not return to work. To help her cope she bought a dog and started to meet friends for coffee and cake but always had to rush home for her dog. That’s when she came up with the idea for Doggy Diner. She now has 3 diners where owners and dogs alike can go along and catch up. She is now looking to put a franchise model in place and become the next Costa of the dog world.

Julia got into chemical engineering as a child and travelled the world where she found her love for brewing. She now runs the Tyne Bank Brewery and Tap room and has just introduced a Brewery babies event for parents to come along and enjoy cake and a coffee. Julia loves her fruit beers and is constantly trialling new ideas for craft and artisan beers. 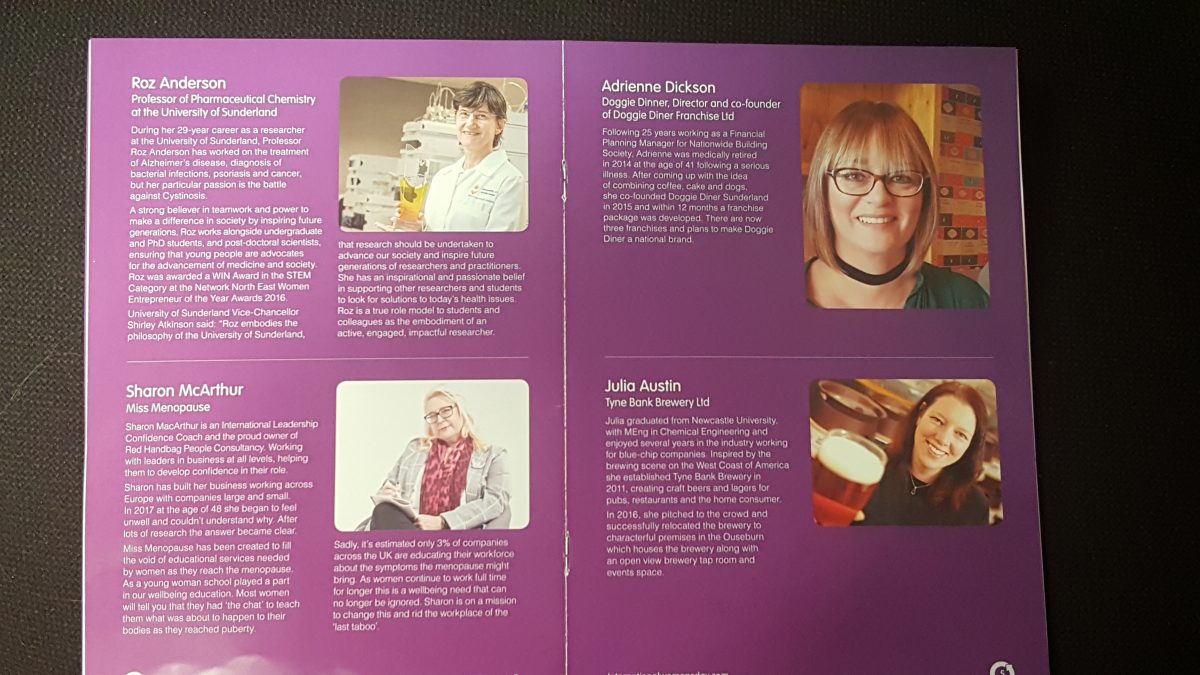 Allison set up her cheese company in 2016 and has gone on to win cheese awards and North East Business Woman of the Year in 2017. Allison said that many of her customers like the fact that they know where the cheese comes from and are willing to pay a premium for artisan cheeses and to support a local business. The family run business uses cows milk from the familys dairy farm in Teesdale and has been in the family for four generations. She sells her cheese all over the Uk to farmers markets, restuarants and at festivals.

Allison is also an author and previously spent over 30 years working in project management.