What is Geothermal Energy?

Geothermal Energy can be found in areas where there are active volcanos such as Iceland. Power is produced from steam brought to the surface at temperatures in excess of 200 C but they are not the only source.

In non-volcanic areas geothermal energy is used successfully to provide heat. For example, there are dozens of geothermal schemes in Paris, including one that heats Orly Airport.

Geothermal energy is ultimately derived from the decay of radioactive elements deep within the Earth’s crust, and this heat naturally dissipates towards the earth’s surface.

In the UK several geological features at depths of a mile or more could deliver the potential for geothermal energy.

Geothermal heat is accessed by drilling a deep well to target water in permeable rocks, or flowing through faults, at temperatures generally in a range of between 60 to 80°C.

The hot geothermal fluids are pumped to the surface where the heat is removed and the cooled water returned below ground, usually through another borehole. The water can be used to heat buildings or – if it is hot enough – for power generation.

Between 2003 and 2006 The University of Newcastle along with PB Power investigated the potential of using Geothermal Energy with exploratory drilling taking place in The Wear Valley.

Drilcorp were part of the team working on the project.

With the closure of the Blue Circle Cement Works a project to build the UK’s first model renewable energy village was developed as part of the regions regeneration.

Exploration funding was granted by One North East from regional development funds.

The Eastgate borehole in Weardale was drilled in December 2004 at the site of the former Lafarge cement works. Shallow inclined site investigation boreholes were drilled to pin down the position of the Slitt Vein (Cambokeels Mine). The mine had a persistent feeder of tepid water. A total of 5 boreholes were drilled at depths of 60m in length at angles of dip between 45° and 60°.  The result was scar limestone which contained extensive mud filled caves.

The deep drilling programme was carried out to 1000m finishing at 8.5” diameter to allow for geophysical logging at depth. During 2006 pump tests were completed and interpretation of the data and development of further proposals were ongoing.

The findings showed very encouraging rise in groundwater temperature with increasing depth of around 46°. If the borehole had been sunk to a production depth of 1800m the temperature at the bottom of the hole would have been around 78°.

Following heat exchange with fresh water this would have been sufficient to heat conventional radiators and supply hot water tanks in a large number of buildings.

It was the first deep geothermal exploration to be drilled in the UK for over 20 years. Very high flows of water were found and pumped to the surface, the water was warm enough to swim in.

Further information on the project can be found at: 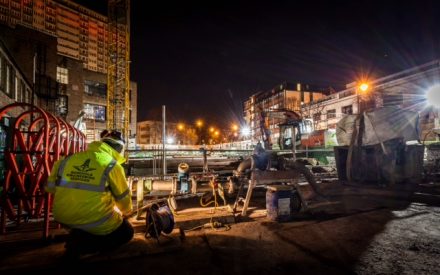