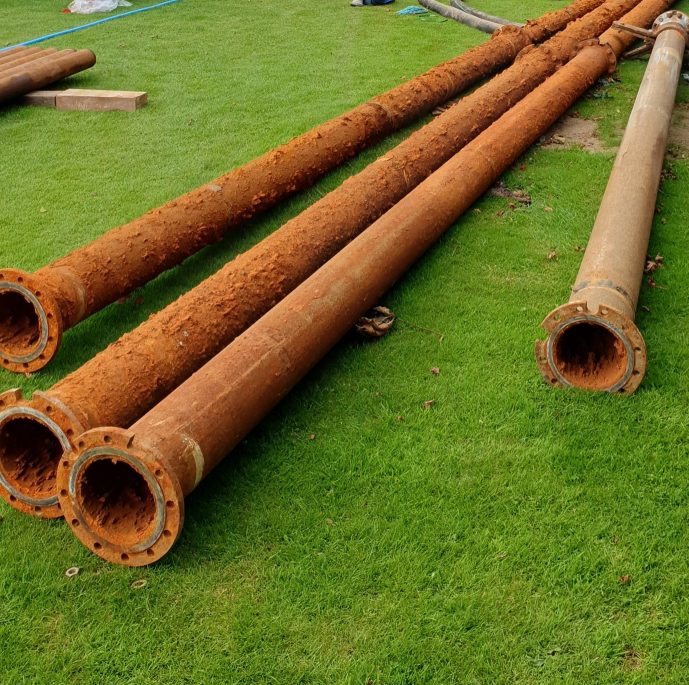 The site has 3 boreholes on site dating back to 1934 when a test well was drilled to 60 metres and had an output of 5400 gallons per hour. A further 2 wells were sunk in 1935 and 1938 which are 77 and 79 metres and have a capacity of 30,000 gallons per hour. As with any asset and especially ones which are so old they need to be maintained to ensure optimum performance, yield and water quality.

Water plays a vital role in the flavour and quality of brewed beer and, as the single largest component of beer, the source of water will undoubtedly have an influence on quality and taste. Regular borehole maintenance is accepted as an essential part of borehole ownership to maintain high quality water, sustain discharge rates and maximise the lifespan of a borehole. Drilcorp were contacted by our client to clean their borehole following a CCTV survey which showed murky water and the build-up of orange-coloured biofouling on the casing and uncased rock in their borehole.

The accumulation of orange-coloured biofouling and iron oxide encrustations on casing, pumps and pipe surfaces is a well-known frustration to borehole owners. Such deposits often coat and clog well screens, pumps, rising mains and well-head pipework and impair the hydraulic efficiency of a borehole. Moreover, the presence of biofouling in a borehole can also indicate the favourability of a downhole environment to other microbial processes and bacteria that coexist with iron slimes, such as e.coli.

Iron biofouling and precipitation is commonly associated with the biochemical reduction of iron oxyhydroxide. This process is attributed to naturally occurring bacteria which thrive in iron-rich and oxygenated environments. In addition to biofouling and oxide precipitates, these bacteria are also known to play a part in enhancing the corrosion and erosion of a borehole, increasing the accumulation of soluble iron in water, and influencing the water chemistry.

The ‘Borestorer’ jetting machine was the ideal machine to carry out the cleaning process as it uses high pressure jetting technology that can penetrate through the casing and gravel pack to the maximum extent of the borehole. The use of this machine rather than traditional acidization methods limits the risk of contamination from chemicals while still being a proven method for borehole rehabilitation.

Following a site visit, our BES team conducted a CCTV survey after physically rehabilitating the borehole with the ‘Borestorer’ jetting tool so that the condition of the borehole could be visually compared with previous CCTV surveys. The specific objectives of this project were to:

Conduct physical rehabilitation through the use of the ‘Borestorer’ jetting machine and by airlifting.

Conduct a CCTV survey after physical rehabilitation to inspect the borehole and outline the scope of iron biofouling and iron oxide precipitation.

Compare key metrics before and after treatment to evaluate the effectiveness of the rehabilitation.

The investigation of the pump and riser by visual inspection identified iron biofouling and iron precipitation . The riser had thick accumulations of iron both inside and outside. Biofouling and iron precipitates were also noted on the pump, and in water airlifted from the borehole (fig. 2). During the start of the airlifting process, the water was noticeably turbid and contained small chunks of iron. This is likely due to the jetting tool removing this material from the casing and open hole rock face. The water cleared up towards the end of the airlifting process.

The CCTV survey after jetting was conducted to assess the effectiveness of the jetting and airlifting works. The supervisor on site noted that the borehole appeared far cleaner than it used to be and that the water was visually very clear, whereas it used to be murky.  During the survey, it was noted that:

The uncased borehole was clean of debris with the rock face clearly visible. Water in this section was very clear with good visibility of the rock face, fractures and ledges. Bedding fabric can be observed and some yellow/white banding.

The water was slightly murky for the first 30m which reduced visibility, but clear deeper than 30m with good visibility.

The steel casing was visible throughout the cased section and appeared to have a slightly uneven texture in some places. Some rusted holes were observed.

The casing had a mottled appearance from around 10m to 53m thought to be either a result of corrosion, or a combination of clean steel with another darker material affixed to the steel casing. Below 53m, the casing was mostly clear.

The casing joints looked in good condition with no visible threads, cracks or damages. Some joints were obscured by corrosion/material affixed to the casing and were therefore not observed/noted in this survey.